Vietnam becomes a rising star in Southeast Asia! Here’s how 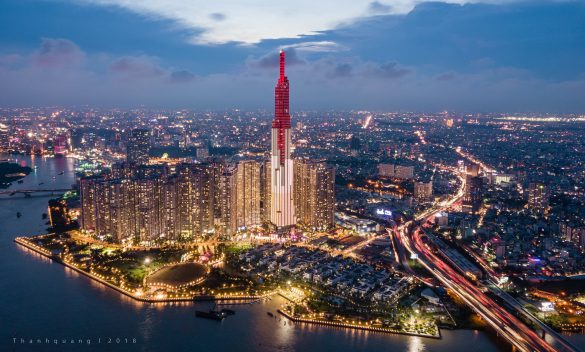 Walking around in Vietnam’s capital city of Hanoi, you can feel boundless energy everywhere. People whiz by on scooters, buy and sell everything from phones to food in the countless small shops, and run to and fro to get to school or work. Vietnam is young, growing, and anything feels possible.

It wasn’t always thus. A mere 30 years ago, the country was one of the poorest in the world. How did this southeast Asian nation grow to become becomes a rising star in the region?

In its latest “Asia Economics Quarterly” report, the Hong Kong Shanghai Banking Corporation (HSBC) said Vietnam posted the fastest growth in Asia in 2020 and will once again be among the star performers in the region in 2021, Nie Huihui reports on the Global Times.

Related: How Vietnam will become a rising star in FDI attraction?

According to Nie Huihui, Vietnam is recognized as a role model for its pandemic control measures, and for achieving an economic growth of 2.91 percent in 2020. The economy has maintained growth for three decades, overcoming the Asian financial crisis and global financial crisis, stepping to becoming a middle-income country from an impoverished society. The big question is: will the country maintain the economic miracle?

Vietnam’s rapid economic development has been driven by a range of factors. Vietnam’s exports to the US surged 29.1 percent in 2019 and 24.5 percent in 2020. With exports valued at $76.4 billion in 2020, Vietnam has become the second largest source of imports of the US. The large trade surplus with the US has ensured Vietnam’s overall trade surplus reached consecutive growth in five years, reaching a record high of $19.1 billion in 2020.

Geographically positioned between ASEAN and China, Vietnam depends on the market advantage of regional integration and enjoys the facilitating conditions of zero tariffs on raw materials among ASEAN member economies.

In recent years, advanced countries in ASEAN have increased investment in Vietnam. Singapore’s investment in Vietnam made up 31.5 percent of the FDI in Vietnam, ranking as the largest foreign investor. As a neighboring country to China, Vietnam also benefits from the production model of “China+1.” Through promoting deeper cooperation with China and taking the convenience location of marine transport, Vietnam has become a key part of Asia-Pacific trade network.

Also read: How to register a foreign invested company in Vietnam

China is not only the largest source of imports to Vietnam; the world’s second largest economy has been increasingly becoming an important export market. In 2020, China has surpassed EU, becoming the second largest export destination, taking up a quarter of Vietnam’s exports.

In addition, Vietnam can take the geographical advantage as a land-sea connection point, with the help of the Lancang-Mekong Cooperation (LMC) and the New International Land-Sea Trade Corridor projects, undertake the vast markets of ASEAN and China, even reaching the western China region.

However, Vietnam’s economic development also faces some challenges. In short term, the COVID-19 pandemic’s impact on the world economy will linger, which means it’s not time for the tourism industry to recover.

Affected by shrinking consumer demand in the US and Europe, the textile and footwear sector, which accounts for a quarter of Vietnam’s exports, experienced negative growth in 2020 for the first time in 25 years. Vietnam’s exports to EU experienced a decline, with the proportion shrinking from 15 percent in past years to 12.7 percent.

The surging trade surplus with the US has put Vietnam facing sanctioning measures from the US. In December 2020, Vietnam was labeled by the Trump administration as an foreign exchange rate manipulator. Vietnam’s bulk exports, including wood, textiles, and footwear, were being investigated by the US.

But even if Vietnam does get hurt by the negative impact of Covid-19 pandemic, it can still count on its own burgeoning middle class to deliver the next boost of growth. Both domestic and international firms are eyeing rapid expansion in the country, as more and more people gain the purchasing power to consume goods and services. It may mean that one day, instead of the hustle and bustle of small shops and scooters, Vietnam will be characterized by large malls and cars. But for now, Vietnam is growing, at its own pace, and in its own way.

The 13th National Congress of the CPV being held from January 25 to February 2, and new leaders will be elected and the next five years of economic policy will be mapped out. Vietnam is a rising star which is worth watching, according to the Global Times.

Vietnam is becoming a beacon in the region?

How could Vietnam’s GDP reach the fastest pace...

How Vietnam will become the fastest growing economy...